Please enjoy these snippets of Christmas favorites that I perform at home and office visits along with stories, dancing and a bit of Santa magic.

Whether you are having a Christmas party or making a television commercial, make it exciting and hire Atlanta Santa that can really sing.

SANTA CLAUS IS COMIN’ TO TOWN

Hire Atlanta Santa – Santa Jeaux – that sings for commercials and parties – ‘Rudolph the Red-nosed Reindeer’ had a very shiny nose.

CHESTNUTS ROASTING ON AN OPEN FIRE

Santa Jeaux sings ‘Chestnuts Roasting on an Open Fire’ and many other traditional Christmas songs. He also sings a few new songs that he has written himself. For example he has written a song entitled ‘Dearest Santa’. It is a letter to Santa Claus from an 8-year old boy named Billy. His sister is trying to make him think that Santa Claus is not real. And, he is almost finished writing a song entitled ‘Around and Around the World I Go’. It is loosely based on the tune of Chuck Berry’s ‘No Particular Place To Go’. Hire Atlanta Santa, Sugar Hill Santa to hear him sing it for you.

HAVE YOURSELVES A MERRY LITTLE CHRISTMAS

Atlanta Santa, Santa Jeaux, sings his traditional closing song – ‘Have Yourselves A Merry Little Christmas’ as he departs your event in a magical way. 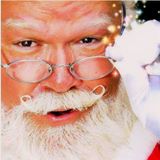